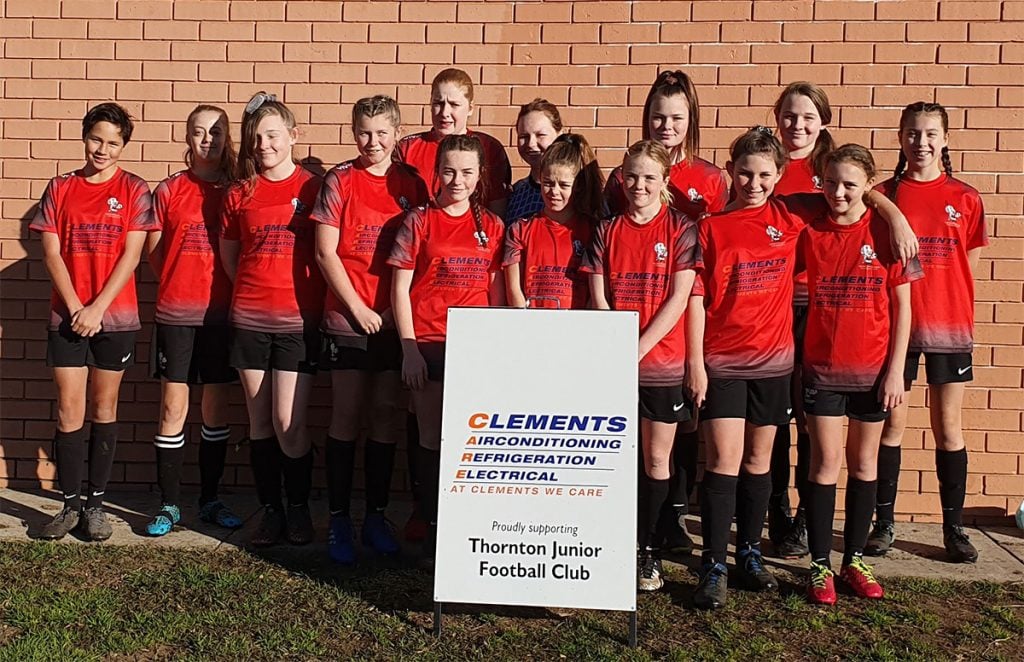 At Clements, we care, and we have been involved in the local community since we began in 1989. We love being able to support local sport, as we know how important it is for children and teens to have the opportunity to develop their talents, and learn valuable life-lessons from team and competitive sport. For 2019 and 2020, we have sponsored Thornton Junior Football Club’s first ever girls’ soccer team!

We love seeing our logo on their jerseys, and knowing that we are part of something that is new and exciting for the club in 2019. The team came about after a couple of girls, who had been without a club for years, wanted to play in the girl’s competition. Thornton Junior Football Club Secretary, Kristen Birkett, put out an expression of interest and was able to recruit five more players. Still not enough to form a whole team, Kristen was determined to make things happen. After advertising locally on Facebook, direct emails to schools and some word-of-mouth, Thornton Junior Football Club finally had their all-girls team! In fact, the recruitment efforts were so good, that they were actually turning players away by the time the season started.

Knowing that such effort and determination was placed in the formation of the team, it was an easy decision for Clements to come on-board as sponsors. It’s also no surprise to us that these girls have gone through their season undefeated so far! The team is highly comprised of younger girls, and their ages range from 11 through to 14, placing them in the Under 14s age group. The club decided to enter them in the B grade competition. Lead by an amazing coach, these girls are working together beautifully and are playing some brilliant football.

Thornton Junior Football Club, also known as Thornton Devils, was founded in 1981 and is a member of the Hunter Valley Football Association. They have teams in all age groups, and now an all-girls team too! Their home ground is the Allan and Don Lawrence Oval in Thornton.

Kristen Birkett tells us, “We are now looking forward to the finals and enjoying the girls’ hard-earned success.” At Clements, we are proud of the girls for all their efforts this season. They are clearly as passionate about soccer as we are about air-conditioning and refrigeration. This is a wonderful journey to be part of, and we can’t wait to see how the season ends. We would like to wish them all the best for the finals. We know you’ll continue playing your best soccer!